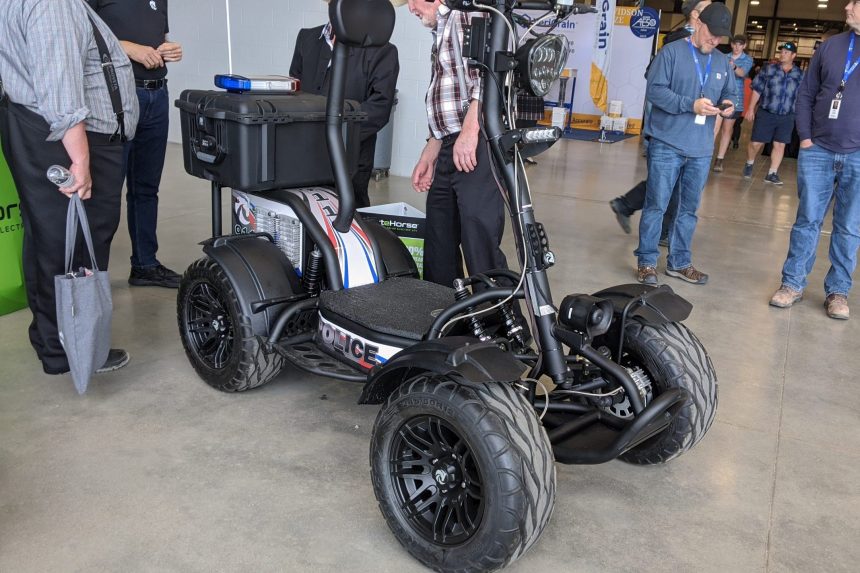 The LyteHorse electric ATV was on display at Canada’s Farm Show on June 21, 2022. (Shane Clausing/980 CJME)

Canada’s Farm Show is back for the first time since 2019 and with its return comes new innovations and gadgets for farmers to try out.

One item that stands out at this year’s show is a standup electric ATV that is designed and manufactured in Regina.

It is created by the company LyteHorse and as Eric Larson describes, it gives people a completely different ATV experience.

“The LyteHorse looks cool because you’ve probably never seen anything quite like it. The standing riding position is a completely unique experience,” he said Tuesday at the REAL District.

“You’ve got such a great vantage point and you truly are one with the environment when you’re out there on it.”

Larson says the company got the idea from a fold-up electric golf cart that can be folded up and put in a car. The company thought it would be cool to have an ATV like that.

“That was where it started. We suddenly discovered that design had an awful lot of torque, power and could do a lot more. It’s evolved into what we see today,” he added.

The ATV won’t be shipping until the fall, but Larson says the company has heard from a lot of different people and groups interested in it. That includes farmers, sportsmen and first responders.

“We’ve had interest from another different markets, law enforcement being one of them,” he said. “Law enforcement, I think what we’ll see there is community policing and the opportunity to move in an urban environment quietly and with a great vantage point and approachability.”

Each vehicle can move as fast as 80 kilometres per hour. 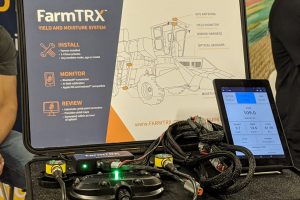 Another item catching people’s attention at the show was a product from FarmTRX.

The company has Saskatchewan ties near Medstead and has created a yield monitor that stands out compared to others in the market.

“Yield monitors have been around since the mid 1980s and a lot of these systems have either failed or weren’t present on combines you could buy from the 1980s to 2005,” said Mark Hammer with FarmTRX.

The product allows farmers to view the yields in their fields straight from a smartphone or tablet. Results are almost instant.

Because of the poor results from yield marketers, FarmTRX’s chief technician decided to try making his own. It would allow for the product to create a yield map so farmers can save a lot of time and money.

The product was launched in 2018 and Hammer says it has so far been successful.

“We’ve got about 2,000 of these globally. Most of them are in Canada and the U.S., but we’ve got a significant install in Finland, Ukraine and across Europe,” he said. “We’re in about 40 countries right now.”

Hammer adds while the product is manufactured in Saskatchewan, a lot of people still don’t know it exists.

“I would say maybe 10 to 20 per cent of farmers knows that this exists,” he added.