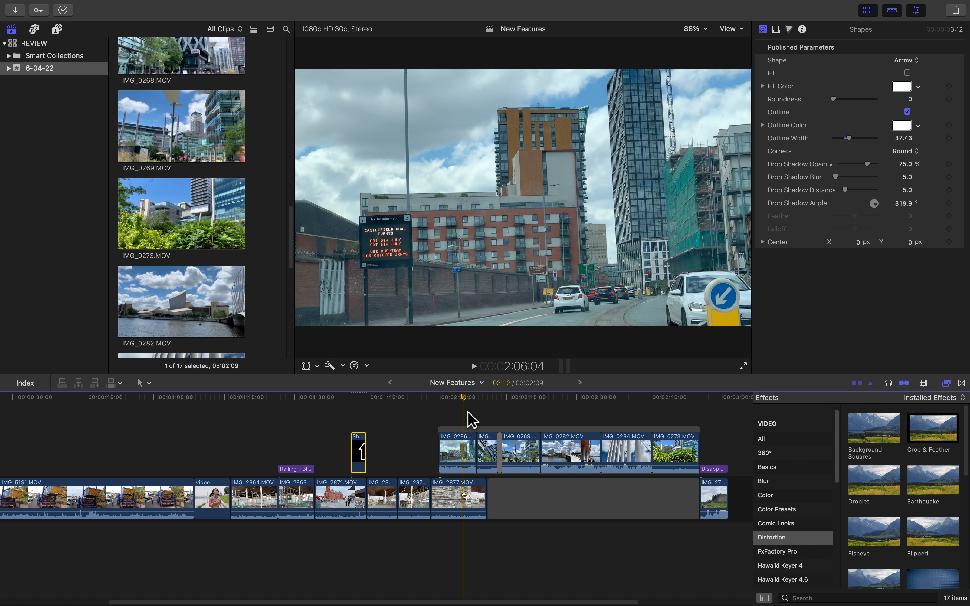 Adobe Premiere Pro or Final Cut Pro? When you’re investing in the video editing software that’s right for you, it’s an important decision – both offer first-class editing tools for beginners and professionals, for the home or studio in different ways.

A lot relies on how you’ll use the video editor. Adobe Premiere Pro is a gold-standard, used across the film & TV industry – in our 5-star review, we reckoned, the software “earns its reputation as one of the best professional video editing software out there. Packed with pro-level tools, the Creative Cloud app’s newest updates create an effective movie-making workflow.”

The latest version of Final Cut Pro, meanwhile, has seen dramatic, recent improvements. And it continues to evolve – albeit under pressure from top industry editors who want to see more productions using Apple’s flagship video editor. During our time with Final Cut Pro, we found it “an incredibly powerful piece of video editing software. It’s been around for a while now, and might not be evolving as fast as some would like, but it’s very stable, and the more recent features help it remain a worthy contender.”

Our pick for best video editing software overall would be Premiere Pro. But there’s no right or wrong answer. It’s about finding the software for editing videos your way. That matches the machine you use, and fits your creative flow.

We pitted Adobe Premiere Pro vs Final Cut Pro to see the similarities and differences of two top video editors, so you can choose the one that’s best for you.

Your first choice comes down to the machine you’re using – are you running Windows or macOS?

Adobe Premiere Pro is a video editor for PC and Mac.

Final Cut Pro is only available on Mac.

That gives Mac owners a genuine choice between the two tools – especially if balancing the pros and cons of native platform integration and M1 support.

However, it’s worth seeing what video editing software for Windows and Mac makes the cut in the best alternatives to Adobe Premiere Pro.

A great user interface is easy to navigate and intuitive to use – and, as you’d expect from premium tools, both Premiere Pro and Final Cut Pro deliver outstanding designs.

Adobe Premiere Pro may feel a bit more overwhelming to novice editors. Because it’s built for professional use, there’s a lot going on at first glance – but like all Adobe products, the interface isn’t really as complex as it first appears. It doesn’t take long to master, and once you know where to find the right tools and how to use them, it starts to feel like child’s play.

One recent update to Adobe’s premium video editor introduced the Essentials and Vertical Video workspaces. These simplified workspaces are streamlined for general editing and editing in the 9:16 aspect ratio, placing all key tools within easy reach in a logical left-to-right order.

In our review, we found “FCP’s simple interface hides a powerful and stable video editing package.”

Workflows will be unique to you. It’s about choosing the best software for editing videos your way – a way that just clicks.

If you’re already engaged in the Adobe or Apple ecosphere – for example, you or your business use Photoshop for your social media marketing or iCloud for your cloud storage – then it makes sense to stay within that sphere. It’s usually more cost-effective, and there’s no need to learn a whole new system, so productivity won’t take a hit.

Both video editors offer excellent editing experiences. Premiere Pro’s workflow is as seamless as you’d expect from the industry-standard, ideal for heavy workloads. The latest version has a new focus on importing media. A redesigned import window now places your clips front and center. Selecting these and clicking Import then adds them to your sequence in a new project.

Although these settings can be changed, in our view, “getting right down to working with your clips in their native format will be what people choose to do. This removal of potentially unnecessarily complex tweaking is most welcome.”

Apple’s video editor offers a similarly fluid workflow. We found it much easier to get started, but feels best for lighter editing work. It’s also seen a lot of bug squishing, improving the experience further and “we can state with confidence that glitches that frustrated us back in 2020 no longer reared their nasty little heads. We remember random glitches with rendering on export, for instance, that really were a deal-breaker. These have disappeared.”

Performance is always a factor when choosing a video editor.

We found Premiere Pro is fast and stable (though not as fast as Apple’s software when exporting and rendering). Final Cut Pro now matches Adobe in stability, feeling robust under use.

We discovered “the app very rarely crashes. When it does, you’ll be glad for the software’s automatic saving feature that means that most of the time, you can relaunch FCP and get back to work without having lost a single cut.” However, we still think, “it’s about time things felt stable enough that you don’t have to worry about it at all.”

The introduction of Apple silicon support on M1 machines also promises a further performance boost for both editing video software.

According to Adobe, HEVC exports “are faster with macOS 12 on M1 Macs. Hardware encoding is now enabled for DCI 4K and 8K HEVC exports, resulting in significantly faster performance.”

And Apple continues to improve performance, efficiency, and stability on Macs with Apple silicon. “Working with Apple’s Silicon does speed up processes,” we found.

When it comes to tools in the Premiere Pro vs Final Cut Pro showdown, both are extremely well-matched. But then, both are aimed at those who want professional results. That includes 8K support and the now metaverse-inspired 360-degree editing for virtual reality.

It also saw the launch of the new transcription option, an automatic speech-to-text tool that we raved about at the time. Not only does Premiere Pro now automatically transcribe and caption videos in 14 languages, you can even search clips for a specific word or phrase.

Apple has come under fire for leaving Final Cut Pro to apparently fester – resulting in an open-letter from editors desperate to see the video editing software take a central role in film & TV productions.

However, in recent months, Apple has rolled out a raft of new updates and features that keeps it relevant for editors new and old. It even dropped the controversial X from its name. Apple Final Cut Pro X is vanquished.

Both video editors also use artificial intelligence to simplify the workflow. Adobe’s AI Sensei is built into the Adobe stack, but will be most familiar to creatives making quick, accurate edits in Photoshop, Illustrator, and Premiere Pro.

One cool tool we found for Adobe’s AI was Remix, which retimes songs to fit your video. Traditionally, this can be a time-consuming process. So, we tested the capabilities with an original track (just to make sure the AI had some work to do). It took just a few seconds. And sounded great.

Apple’s FCP AI helps you adjust color corrections, and detects and fixes duplicate clips. The The AI voice isolation tool will be welcomed by anyone looking to improve audio quality, as it cleverly strips back background noises.

It also features AI-based effects. Using the comprehensive object tracking tool, you can now drag effects onto the preview screen, apply the effect to a specific area, and let the robots do the legwork. While the AI recognises certain objects, like buildings, we found it excelled at facial recognition.

For iPhone 13 owners, the launch of the video editor’s new Cinematic Mode will be especially interesting, as it lets you film, pull focus and track focus on your phone. You can then manually handle the f-stop, just as you would with any other camera.

“Changing it over time is just a matter of keyframing the effect,” our review noted. “It’s not perfect, of course. That’s due to the algorithms used to separate the subject from its background. But, under the right conditions, being able to play around with your footage in this way can lead to very impressive results.”

As you’d expect, each video editing software plays best with the company’s other products.

Premiere Pro works flawlessly with other Adobe tools. Notably, it works great with Adobe After Effects –  “a visual effects powerhouse” and our pick for best VFX software (you’re free to use any of the best Adobe After Effects alternatives, too). However, there’s no integrated visual effects in Premiere Pro, so if you’re a motion graphics designer or compositor, you’ll need to introduce a secondary tool into the mix.

The visual effects tool might lack the power of After Effects or Autodesk’s animation and 3D modeling software Maya. But we thought it was “a lot more accessible to less-experienced VFX artists. Among its features are advanced color correction and a useful set of tools for designing and animating text.”

Premiere Pro, like most Adobe tools, is only available through a monthly or annual subscription that must be maintained to receive the latest updates and features.

The standalone video editing app costs from $20.99 / £19.97 a month. The Creative Cloud All Apps subscription, which includes over twenty tools like After Effects. Photoshop, and Lightroom, starts at $54.99 / £51.98 a month.

Final Cut Pro is available for a one-off payment of $299.99 / £249.99. This gives you access to all future updates and features, big and small. The same is true of iMovie and Apple Motion, too, so there’s no on-going costs when editing video with Apple products.

It’s not just a case of Premiere Pro vs Final Cut Pro – there are a lot of excellent video editing software out there for a range of skill-levels and uses.

Top picks include free video editor DaVinci Resolve – a Hollywood-level tool that “may look overwhelming at first glance as it’s so full featured, but that’s because it contains pretty much everything you need to catalog, organize, edit, alter, and composite your video project.”

CyberLink PowerDirector and Pinnacle Studio are surprisingly easy to use considering the high-end features on offer.

Premiere Pro vs Final Cut Pro: How to choose the best video editing software for you

When deciding which is best, Premiere Pro or Final Cut Pro, it really comes down to platform, ecosystem, budget, use, and experience.

Both are intensely powerful video editors – and if you’re running a Mac, you have the luxury of choosing between the two. If you’re on Windows, you can only get Premiere Pro or look for alternatives.

If you’re part of the Apple or Adobe ecosystem already, you’ll likely be most comfortable using the company’s own video editing software. It makes the learning curve less severe, and can possibly save money.

Make a decision based on your needs – both now and in the future. If you’re a big, media-heavy company, Premiere Pro will likely meet all your needs. Smaller businesses and sole creators may be better served by Final Cut Pro.

But, really, it comes down to experience – how it fits into your creative workflow. And that’s entirely subjective. So, it’s worth seeing how to download Premiere Pro and Final Cut Pro, trying them out, discovering which one works for you.

When testing top video editing software like Premiere Pro and Final Cut Pro, we’re looking for fluid interfaces and professional results. Our reviewers are steeped in years of editing experience, and thrilled by new features, tools, and updates that make using the software easier for consumers.

User experience is critical. Under clear instruction, creatives should be able to intuitively navigate the video editor app and start building projects – friction-free. In our experience, both tools offer outstanding experiences centered around the user.

With premium video editors like those from Adobe and Apple, we also look how well they ‘play’ with other tools. We expect high-powered performance – users shouldn’t have to worry about software crashes or footage that stutters on export.

See how we test, review, and rate on TechRadar.